Top 5 Cultural Differences Between Hawaii and the Mainland

Some of the cultural differences between Hawaii and the mainland may seem apparent but some of them may come as a shock to you. For example, you have probably already heard that driving styles in Hawaii are much slower and relaxed, it’s pretty different from the mainland. You’ve also probably heard about the fact that we are a very liberal state, and the democratic party wins almost all elections, for the most part. Cultural differences are important to know before moving somewhere just in case you might not be a fan of them and have to re-think your entire move.

Speed limits are significantly lower here, I’m talking 50 on the freeway. Some drivers dare to go at 60, but that’s considered very fast, if you drive any faster than that you’ll probably hit someone. People are also very courteous with letting people in their lane and letting others go first. We always waive a “thank you” or a “shaka sign” to others for letting us get into the lane. The first time I did that on the mainland, my friends in the car thought I was flipping off the person behind me. It’s also frowned upon to drive arrogantly and speed past someone if there’s traffic up ahead. If one person is stuck, we’re all stuck. A lot of people on one tiny island!

The cost of living is so high in Hawaii that most people don’t own things like jet skis, boats and trailers. They typically just have their home and a surfboard and that’s it. Hawaii takes on a more qualitative lifestyle compared to the mainland’s quantitative lifestyle. Hawaii doesn’t require a lot of toys to have fun because our water is warm enough that it’s fun to just wade around in whereas mainland lakes require toys to enjoy because the water usually isn’t warm enough to wade around in. Hawaii properties are also much smaller, so there’s really no room to store toys, if you have any. One of the coolest views ever!

Everyone is a minority

Everyone is a minority in Hawaii. A majority of our residents are Asian or Hawaiian, with a small fraction of the population being caucasian. So in other words, the only dominant population is Asian but because there are so many different Asian groups like Japanese, Chinese, Korean and Filipino that there isn’t any one Asian group that dominates. It’s pretty mixed, so everyone feels like a minority. 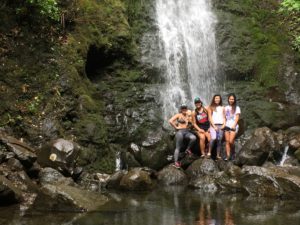 My friends and I at the end of the hike!

The state of Hawaii is primarily liberal and the democratic party wins almost every election. It’s been like this for a while, and when Obama was elected in ‘08, the state was in full support of the new president, so the state was pretty solidly democratic. You can see evidence of this in our social welfare program expenditures. You can also see this in our past governors given that they are all democrats. The only exception to this rule was Governor Linda Lingle ® who was elected during a very unique time when the republicans of the state had a small opening. Hawaii has been a blue state for almost every presidential election.

People in Hawaii have a very self-deprecating sense of humor. It’s a common trend, however it could just be my age group. At the end of the day, it all depends on the type of friends you hang out with, however people in general don’t make arrogance jokes about their self-superiority. It’s not that common to hear those. As one of the differences between Hawaii and the mainland this could come as a surprise to some people.

At the end of the day, the cultural differences between Hawaii and the mainland are something you can probably adjust to. It shouldn’t be a big problem so long as you have an open mind and an open heart!